How to Write a Script For A Short Film

Home Blog How to Write a Script For A Short Film

How often have you come across a movie, short film, or even an advertisement and thought to yourself, “man, what even are these dialogues?”

“What’s wrong with the character development?

“The plot makes no sense?!”

Let me introduce you to the culprit: Bad scriptwriting.

A good script can do wonders for you, while a bad one can do the opposite. Let’s understand this with an example.

Sometimes you might find yourself watching a film about just 2 characters having a dialogue in an enclosed space only to be thoroughly entertained by what the film has to offer. While other times a movie could put in the world’s most expensive VFX and animation only to come across as something you’d never watch again.

So, now that we are well aware of the root responsible for making any film a roaring success or a dropping failure – let’s learn how to create the perfect root.

Must Read: How Product Videos Can Drive Sales for Your Ecommerce Store

Let’s learn how to write a script for a short film.

When someone says a script, what typically pops into our heads is a 2-hour long movie. However, when you explore a little bit you realize almost any successful form of art that needs words is incomplete without a script. Whether it be a film, a documentary, an advertisement, a podcast, or even your favorite stand-up show.

With that in mind – let’s get you started on how you can write scripts for any video production service.

Before you get to writing – you must come up with an idea. The idea has to be clear and crisp. It has to convey your message in a very non-complex way. When we say non-complex we do not mean your idea cannot have layers to it but what we mean is you should be able to break it down in a simpler way. The more simply you can break down a complex idea, the easier it will be to execute it.

Now that we have our idea in place – the next important step is to read up. Pick up scripts that inspire you that serve as an inspiration and will help you write better. It is especially beneficial to read published scripts in the genre you are trying to cover. If you wish to read scripts from different film production companies in India, all you have to do is google your genre, and it’s as easy as that.

Reading will give you a fair idea of how to begin writing your script, but unless you see the practical application of the idea, it would be a little hard to execute it perfectly. Eliminate this problem and give your scriptwriting a more practical approach by watching short films. Pick what you like, and make notes wherever you see a learning curve. Examine the notes and carefully implement whatever is possible into your own script.

4. Begin with the Summary:

Now we can start writing, but wait doesn’t directly jump into writing the script itself. Begin by writing a summary of your idea, flesh out the summary as much as possible, and get into the details of what you would like to see in your film. This stage helps put your thoughts into words and eliminates the chances of you messing up when you begin writing the actual script.

Also Check: How to Choose An Ideal Video Production Company For Your Brand

5. Write down your plot:

You have your details, idea, and intent in place, but a script doesn’t become a script unless it can convey a story. For it to be able to do so, you need to write the plot. Divide your story into smaller parts and scenes. Once you have done that, bulk down each scene, and add all the needed details.

Finally, you can jump into writing the actual script. Use the correct parameters needed to make your script look like an actual script rather than a novel. Search for the format for writing up a script. Rules like the entire document should be single-spaced or that the first page should not be numbered will easily pop up in the search. You can then integrate these into your script. With that done – your script is formatted and ready to go.

Typically the first draft of your script will never be perfect – you will have to keep revising it and adding to it until it is ready to be converted into a film. The process can be tiring, but it’s a common practice for video production services industries and film production companies in India and even worldwide to keep revising their script crafts until they are perfect.

There, you have it! Now you know how to write a script for a short film.

We at Buffalo Soldiers are a creative agency filled with talented script writers and video editors that know how to bring your idea to life. We have worked on short films for UNICEF, Fastrack, famous tech companies, and much more! From a purely tech-driven video to an informative animated one we have done it all. If you are looking for a company that can cater to your video production services needs then we are here for you.

Reach out to us at: buffalosoldiersdigital.com/contact

Tagged with: How to Write A Script for A Short FilmShort Film Script

A massive Eminem and John Lennon fanboy, his low-brow poker-faced sarcasm is quite underrated – sometimes it leaves people tongue-tied. He also does some mean RAPs, his singles have crossed a million views on YouTube and of course he has hit Spotify. 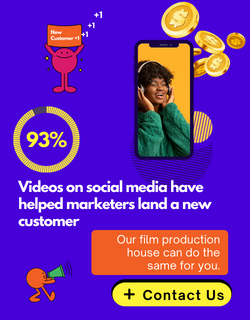 People call it a website. We call it our window to the world. Would you like some cookies 🍪 while scrolling through?
SettingsYes, Please! No, Thanks
Manage consent